ANTERRAN episode 2 will release on November 9! 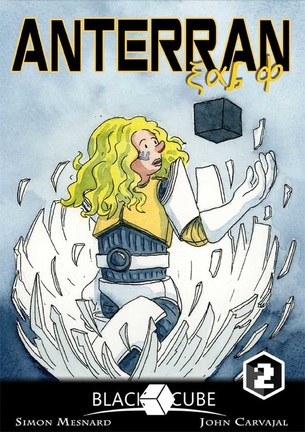 The 2nd short book of ANTERRAN will release on November 9th, 2016!

If you are not yet familiar with the ANTERRAN project, what is it?
It's a series of short comics that I have written in 2015, and that is being illustrated by artist John Carvajal.

These comics tell the past of the Anterran people, that is to say the creators of the Ark spaceship and the Black Cubes (yes, the ones you learn about in ASA). It takes place millions of years before the events of Terra and is a prequel to the mythology around the Cubes.

The inhabitants of planet Talifa have created the Sok'as, Black Cubes with great powers. Their use provoked the end of their civilization: "Day Zero"... In this post-apocalyptic jungle, a scientist named Stanl'ey takes care of young Oliv'r. Together, they try to survive, hiding themselves from the dangerous survivors who became mad: they call them Suk'rs. However an encounter with a mysterious girl might change everything.


If you want to be informed about this series of short comics, and eventually buy your own printed copies, you can visit the official page. ANTERRAN episode 1 is still available for free reading online. Episode 2 will be released on November 9! The production of the third episode should begin soon, for a release planned in the beginning of 2017...

Artist/Illustrator John Carvajal is currently in London. You can meet him at Thought Bubble festival in Leeds on November 5-6 where you will have the opportunity to discuss with him, and read in exclusivity the new 2nd book of ANTERRAN.