An all new site!

With Catyph coming next year, and my will to continue the Black Cube series (alone or not), I decided to create an all new website to gather ASA, Catyph, and all other projects related to the Cubes.

This blog will continue to exist in order to give news about the series. The other web domains (aspaceadventure.fr and catyph.fr) will probably be abandoned sooner or later, and as you can see they are already redirecting to the new website. I hope you like the new artwork of Catyph and the design of the site!

Feel free to send me your feedback or questions!

I would like to take this opportunity to remind you that I send all my news (about the Black Cube, but much more!) to The Icehouse collective that I helped founding last year. It's a great team of indie artists and gamedevs who help each other, and I'm glad to be part of this worldwide experience that everyone can join with a creative project, and enough motivation to support us. If you like the Black Cube, please follow The Icehouse on Tumblr or Facebook. You could discover the work of creative artists such as John Carvajal, Luminy Studios, Sand Kerion, Kiboochan, Beckoning Cat, and many more... or simply enjoy the writings and newsletter of our manager Roger RKT! I'll be there too.

Sorry that during the last weeks I didn't give a lot of news about my projects, here on the Black Cube blog. The truth is that I had hope that you would learn more details about CATYPH through the internet press. In last September (like several times during the past 15 months), I contacted a large variety of websites and magazines (indie & famous sites), providing screenshots, trailers, and even a private playable version with 3 regions of moon Tytaah. I am at the disposal of anyone who wants to publish news/exclusive details about my upcoming game.

I am also quite active on The Icehouse collective blog/Facebook, on several forums, and everywhere I can (but I can't be everywhere!). I really hoped that a few articles would be written about my upcoming game here and there, and that I would get some exposure before the final release, but nothing happened yet. It would seem that a Myst-like game that is self-funded doesn't raise that much of attention. So I will just continue to do my best, and hopefully things will start to change with the upcoming Beta-Tests (January?).

For the time being, there aren't many thrilling news to share: I'm working very hard 7/7 on Catyph, trying to finish the development for the begining of 2016 as promised. It would not be very interesting to show you screen captures of the process, which consists in writing lines of code/scripting actions in Visionaire Studio. Enough screenshots of the game were already shared in the past: if I show you more, you won't have anything to discover in the game! There might already be several spoilers in the previously revealed screens. 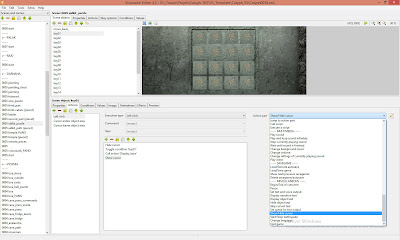 While working on Catyph, I am also taking part to a Community Playthrough of ASA: A Space Adventure on the forums of Adventure Gamers.
My choices during the development of ASA have been largely commented there, and I have tried to explain objectively how I created the game, and the choices we made with Andrea Rinaldi for the Remastered Edition.
And it is not finished! So I will continue to answer to all questions related to ASA (and indirectly Catyph) until the end of the Community Playthrough. It is a very interesting experience and I will try to reconduct it as often as possible.

In the meantime, I ask you to be patient. Please don't forget that most of the time I am alone to work on Catyph, so I hope you can forgive me if I take too much time to publish any update about the development. Thank you :)