Head out of the stars! 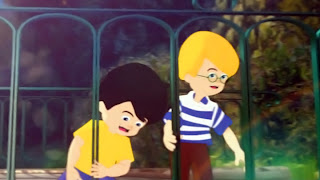 Hey, maybe you've seen here and there one of my other projects : Mon Village est Magique (My Village is Magical). Maybe you're wondering what this is, because it's all in french, and because it has nothing to see with ASA. Am I right ?

Then, this is a beginning of answer :

Mon Village est Magique (MVEM) is a big project I began in 2009 and that is still under development. On the contrary of ASA, it's not a game and it's constantly changing : MVEM started as an amateur book for children, counting a fantasy story which takes place in the french countryside. It tells the story of little Seb and Tommy, two brothers aged 8 & 5, who live in front of the ruins of a castle. The story is very focused on the life in this french country, in an isolated village where the family of the heros lives in harmony with nature. But everything changes when a story of monster in the castle's ruins is reaching the ears of Seb and Tommy. Magic suddenly becomes a part of their life, and they will be drawn into a great adventure !

From this book, MVEM became a project of comic strip, which was abandoned a few month later. Then I decided to continue to write the story, and it has become a series of books in self-publishing, in 5 volumes at the moment, but not ended yet. In parallel, I made a lot of work to bring the books to the screen. With my graphics research, I made a full storyboard for an animated movie! But for a matter of costs, this was abandoned too, and I'm very sad.
Fortunately, I'm working with Chrysalide Studio in France in order to try making a TV series for children! For the moment, we've not done much as we really need to find investors, but I still believe that Seb and Tommy will come to life !

You can watch the books teaser below, and if you speak french, there's the possibility to visit the blog of the project. From there, you can download for free the 1st volume (french, pdf), and if you like it and want to help me, you can buy the sequel for amazon kindle...