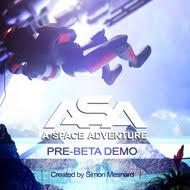 Small changes in the demo of ASA. You won't be concerned if you finished it already.

You can download the updated demo 0.82 via the usual link, on the right of this blog -->

Note that the following updates will also be available in the full version of ASA :

- Videos have been reencoded. I abandoned Xvid for a standard mpeg-4 codec which doesn't require codec installation on Vista, Seven and 8 (on XP I'm not sure, I couldn't test. If someone tries, I'd be interested to know !)

Note : the previous version of this demo (0.8), released in october, contained a file called "silent.exe" which was detected as a possible virus by some protection softwares. It was NOT a virus : silent.exe was a program to install the Xvid codecs silently. To avoid this problem, I released the demo version 0.82, which doesn't use Xvid anymore and so, doesn't contain the silent.exe file.

- The overall compression of the game has been optimized. The original demo was over 250 MB, where the new updated one is less than 150 MB.

- Added a sound effect when you push the buttons on the digipad near the door.

- You can't skip the in-game movies anymore with a left-click, and the mouse cursor is now hidden while they play. You can still use Esc. to skip the videos.

More updates will be available in the full version, like the possibility to switch fullscreen/windowed any time.