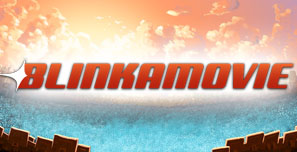 You probably read somewhere on this blog that ASA (the game) is based on my short film from last year, 2011: A Space Adventure. This film, originally posted on Vimeo, got over 30k visitors from the first day online, and now shows proudly the "Vimeo Staff Pick" logo ! Thanks to the nice words from the visitors, I was encouraged to continue the Space adventure, and that's how the short film became a game later.

A few months ago, I have been contacted by Juuso from the all new site blinkamovie.com. It is a kind of vimeo/youtube clone, but it's specifically made for short films and their authors. There are various funtionalities that you don't find on other sites, like the arena or the theater, which help you to discover new short films everyday. There's much more to come on blinkamovie.com : the site just opened to the public, and they say it's still in development. I can only wish them good luck.

Finally, I wanted to share the [short version of the] mail from Juuso that I received a few weeks ago, when blinkamovie launched officially.
2011: ASA is on blinkamovie, of course ;)

We are proud to present – www.blinkamovie.com!

The site is finally open and I hope to have you all with us from this day on. We opened today with 100 free films.
Anyone who gets this mail will be on our hall of fame for the first directors/producers who started with us.

I can’t overstate how proud I am of this selection of films. Within this year I’ve started to watch maybe 10,000 different short films, I’ve sent about 800 requests for the best films and you were the ones who answered and sent their films first. Even as a cynical and overworked Scandinavian I can truly say that you are a most talented group of individuals and I hope the possible success of the site will boost your careers also.

And also if you and your friends have more films coming up or in the reserves, I’d love to have them.

Hope to bump into you in Blink Arena!
Juuso

PS : There are three different ways of watching films:

- Regular: You can watch films by yourself like in any other place.

- Blink Arena: You can enter a social cinema where films are shown 24/7 in a continuous stream. There you can also chat with people from all over the world and ask them to be your movie friends. In Blink Arena there’s also a Blink button, a kind of a virtual applause, which you can use if you like a particular moment in the film you’re watching.

- My Theater: You can create your own private show where you can choose a selection of short films to show friends you can invite via Facebook or email.