On making a slideshow game

I won't deny it : ASA is made with the Adventure Maker software. If most of the game is based on my pictures, the rest relies on this handy tool. If I hadn't found it, ASA wouldn't have existed, so we can say whatever we want about AM, it was a great help. And the soft would be nothing without its community ! Hi guys from the forums, you made ASA possible !

Adventure Maker is a toolkit to create point-and-click games and multimedia software, and is based on simplified Visual Basic scripting. It's extremely easy to use. All you have to do is to import your pictures, add some hotspots to link the pictures to one another, and you are done! 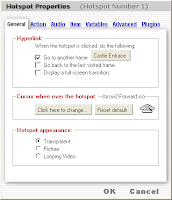