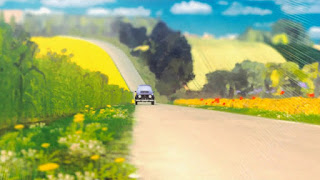 For those who had never heard of me before ASA (which is very likely), I'd like to share some of my personal short films (made on my own during my free time).

In most of these works, I always privileged the artistic approach over realism, which is quite ironic when you know my first job was to make photorealistic pictures. From The Seed to Hunter, I tried to develop a painting or ink effect, and I used it also in A Bug in the Paint. That's only with 2011: A Space Adventure that I started to make new things and went back to more realism, even if it keeps an abstract side due to the "yellow material" (particles).

In parallel, I worked on a much bigger project called Mon Village est Magique (My Village is Magical), thought to become a 3D animated film. It's based on a series of books for children I have written (french only), and I already made a lot of research. There's even a full storyboard of the movie, but the project is stuck for now, and may never be produced as is...

I hope you enjoy the following films. Click on the titles to watch them !
You can also find them on my vimeo : http://www.vimeo.com/gnemix